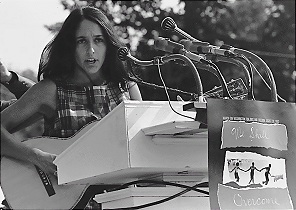 Joan Baez and Bob Dylan were inducted in the Counterculture Hall Of Fame in 2002, during the 15th High Times Cannabis Cup.

Joan Baez (born January 9, 1941 as Joan Chandos Báez) is an American folk singer, songwriter, musician, and a prominent activist in the fields of human rights, peace, and environmental justice.