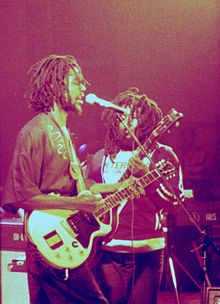 Peter Tosh was inducted in the Counterculture Hall Of Fame in 2008 during the 21th High Times Cannabis Cup.

Peter Tosh (born Winston Hubert McIntosh, (19 October 1944 – 11 September 1987), was a Jamaican reggae musician who was a core member of the band The Wailers (1963–1974), and who afterwards had a successful solo career as well as being a promoter of Rastafari.