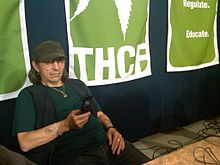 John Trudell was inducted in the Counterculture Hall Of Fame in 2005 during the 18th High Times Cannabis Cup.

John Trudell (born February 15, 1946) is an American author, poet, actor, musician, and former political activist. He was the spokesperson for the United Indians of All Tribes' takeover of Alcatraz beginning in 1969, broadcasting as Radio Free Alcatraz. During most of the 1970s, he served as the chairman of the American Indian Movement, based in Minneapolis, Minnesota.
< Prev Next >