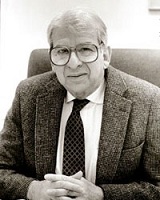 Lester Grinspoon is Professor Emeritus of Psychiatry at Harvard Medical School. He founded the Annual Review of Psychiatry and the Harvard Mental Health Letter, of which he was editor in chief for 15 years. His interest in cannabis dates back to the 1960s, when recreational use of the plant was on the rise. Grinspoon's research began in 1967 under the assumption that cannabis was a very dangerous drug. He reached the conclusion he and the general public had been misinformed and misled and he was convinced cannabis was much less harmful than he had believed.
Since 1967, Grinspoon has grown to become one of the world's most authoritative experts on cannabis, he meant a lot to the rediscovery of cannabis as a medicine. Since the publication of his by now classic book 'Marihuana reconsidered' in 1971 he has lobbied tirelessly for rehabilitation and against criminalization of the plant.
< Prev Next >