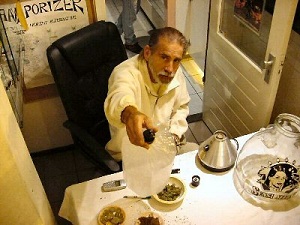 In 2004 Eagle Bill Amato (April 10, 1942 - † May 22, 2005) was the first person to be awarded with the Cannabis Culture Award. He received the award on account of his pioneering work on improving and promoting cannabis vaporization. His quest to make vaporizing easily available to everyone led to his invention of the Eagle Bill Shake ‘N’ Vape, a hand-held vaporizer based on an ancient Egyptian technique of using hot stones to maintain consistent temperature. The Shake ‘N’ Vape is still considered one of the best hand-held vaporizers on the market and is a favorite of many medicinal users.
The Hash Marihuana & Hemp Museum Amsterdam confers the Cannabis Culture Awards to those who have distinguished themselves in the struggle for acceptance of Cannabis in all of its forms, working to ensure that this extraordinary plant has a future where it is fully utilized and a history that is fully known.
< Prev Next >