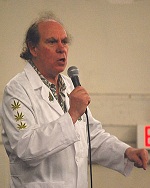 Ed Rosenthal (born Bronx, New York, 1944) is a California horticulturist, author, publisher, and Cannabis grower known for his advocacy for the legalization of marijuana (cannabis as a drug) use. In 2005 he received the Cannabis Culture Award in recognition of his achievements in the field of medicinal marijuana. He developed and promoted civil regulation policies for medicinal cannabis in California and his personal struggles with the American justice system have drawn attention to the irrationality of U.S. federal drug laws, and the harm and suffering those laws inflict on sick people. He is also the author of many popular informative books on growing and using cannabis. The official presentation of his award was held in Amsterdam’s Cannabis College, which has long been a cornucopia of information on all applications of cannabis and hemp.