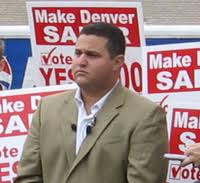 Mason Tvert is co-founder and executive director of Safer Alternative For Enjoyable Recreation (SAFER) and coauthor of Marijuana Is Safer: So Why Are We Driving People To Drink? He coordinated the successful ballot initiatives in Denver in 2005 and 2007, which removed all penalties for adult marijuana possession and designated marijuana possession as the city's lowest law enforcement priority.