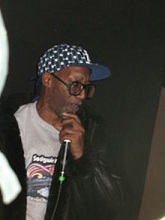 Coke La Rock was inducted in the Counterculture Hall Of Fame in 2010 during the 23rd High Times Cannabis Cup.

Coke La Rock (aka Coco La Rock) is an old school New York City rapper who is often credited as being the first MC in the history of hip-hop.
< Prev Next >