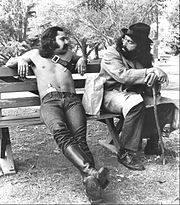 Cheech & Chong were inducted in the Counterculture Hall Of Fame in 2007 during the 20th High Times Cannabis Cup.

Cheech & Chong are a Grammy Award-winning comedy duo consisting of Richard "Cheech" Marin and Tommy Chong who found a wide audience in the 1970s and 1980s for their films and stand-up routines, which were based on the hippie and free love era, and especially drug culture movements, most notably their love for cannabis.
Read more about Richard "Cheech" Marin and Tommy Chong on Friendsofcannabis.com
< Prev Next >