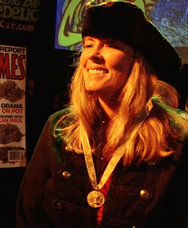 With 25 years of experience Debby Goldsberry was a pioneer of the modern medical cannabis industry. She co-founded the Berkeley Patients Group (BPG) medical cannabis collective in 1999, which she directed for 11 years. During this time BPG became the industry’s premier model dispensary, inspiring others to replicate this patient-based, community minded enterprise. Ms. Goldsberry also co-founded several industry non-profit organizations, and currently serves on the steering committee of the National Organization for the Reform of Marijuana Laws (NORML).