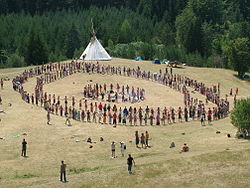 The Rainbow Family of Living Light (commonly shortened to the Rainbow Family) is a loosely affiliated group of individuals committed to principles of non-violence and egalitarianism. They put on events known as Rainbow Gatherings.
< Prev Next >