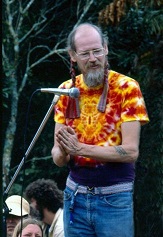 Stephen Gaskin was inducted in the Counterculture Hall Of Fame in 2004 during the 17th High Times Cannabis Cup.

Stephen Gaskin (born February 16, 1935) is a counterculture hippie icon best known for his presence in the Haight-Ashbury district of San Francisco in the 1960s and for co-founding "The Farm", a famous spiritual intentional community in Summertown, Tennessee. He was a Green Party presidential primary candidate in 2000 on a platform which included campaign finance reform, universal health care, and decriminalization of marijuana.
< Prev Next >