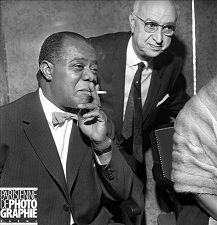 The Vipers Louis Armstrong and Mezz Mezzrow were the second and third inductees into the Counterculture Hall of Fame in 1998, at the 11th High Times Cannabis Cup.

Louis Armstrong (August 4, 1901 – July 6, 1971), nicknamed Satchmo or Pops, was an American jazz trumpeter and singer from New Orleans, Louisiana. Coming to prominence in the 1920s as an "inventive" cornet and trumpet player, Armstrong was a foundational influence in jazz, shifting the focus of the music from collective improvisation to solo performance.
Milton Mesirow, better known as Mezz Mezzrow (November 9, 1899 – August 5, 1972) was an American jazz clarinetist and saxophonist from Chicago, Illinois. Mezzrow is well known for organizing and financing historic recording sessions with Tommy Ladnier and Sidney Bechet. Mezzrow also recorded a number of times with Bechet and briefly acted as manager for Louis Armstrong. He is equally well remembered, however, for being a colorful character as for his music. Both Armstrong and Mezzrow used cannabis their entire adult lives.

Read more about Louis Armstrong, Mezz Mezzrow and the Jazz Vipers on Friendsofcannabis.com.