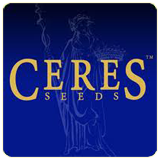 Ceres Seeds is a 100% homegrown Dutch seed company. Its history goes back to 1988 when its founders started their first seeds and cuttings. There is a famous childhood story of one them, buying cuttings and growing supplies at the Sinsemilla Fan Club – with his grandmother! The Ceres Seeds team was learning the ropes back then. In the early 1990s, they worked for the old, infamous Dreadlock Coffeeshop in Amsterdam's Red Light District, as well at reputable seed companies such as Sensi Seed Bank, where they learned how to produce and cross strong, healthy plants.

Ceres Seeds’ original (land-race) seeds came from the imported Jamaican, Thai, and Colombian weed that formed the stock of many Coffeeshops in Amsterdam before the modern varieties took over. With a little help from their friends throughout the Dutch cannabis industry, Ceres Seeds also acquired some Indica-dominant varieties that had already been in Holland for many generations.