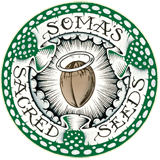 Soma started growing cannabis in 1971 in southern Vermont. He owned and ran a vegetarian restaurant and bakery. As Soma became more aware of his diet, a deeper knowledge of ecology and its effect on the environment came with the territory. This naturally led to him growing cannabis in an organic eco-friendly manner. From that point on, He has been finding different ways to make his thumbs greener.

Through the years this magnificent plant species has helped teach him the art of having and taking care of houseplants, the art of nurturing, and the art of photography to name but a few. Far from being a demotivator, marijuana has become interwoven with many of his interest, and its influence has opened his mind to explore many he might have never other wise pursued. Although marijuana laws are never fair around the planet, Soma refuses to give up his right to have his sacrament and medicine constantly near him in the form of clothing, food, plants, paper and smoke. In this way Soma does his part to overgrow the whole darn place.