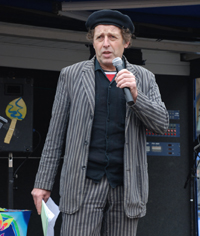 Since August de Loor became the first community worker in the Netherlands in 1970, he has been involved in everything related to drugs and drug policy in Amsterdam and far beyond. For years he ran the Drugs Advice Bureau and carried out pioneering work in the field of harm reduction, XTC testing at parties, the Safe House campaign, heroin distribution and the coffee shop as a crucial part of drug policy.