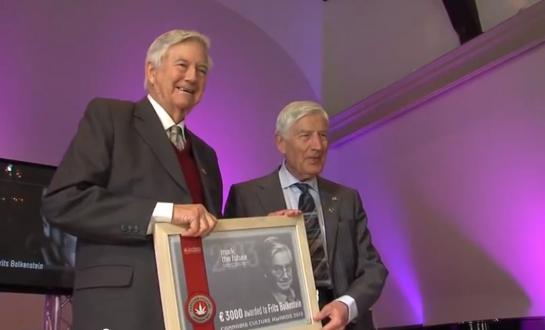 On Tuesday April 23rd 2013 in Amsterdam, Frits Bolkestein received a Cannabis Culture Award from former Prime Minister of the Netherlands Dries van Agt, the founder of the Dutch tolerance policy. Spuiten en Slikken was awarded by Frederik Polak. In his acceptance speech, Bolkestein made an elaborate plea for the legalization and regulation of the cultivation, trade and consumption of cannabis.

Frits Bolkestein
Frits Bolkestein is one of the most prominent and successful Dutch liberal politicians, and outspoken advocate of the regulation of drug trade. By awarding him the Cannabis Culture Award s 2013, the Hash Marihuana & Hemp Museum would like to thank Frits Bolkestein for his thoughtfull approach to the drugs debate in The Netherlands.

Spuiten en Slikken
Even before its first episode had been broadcast, Spuiten & Slikken (literally Shooting & Swallowing) gave rise to concern in the Dutch Houses of Parliament. The then-Minister of Justice called the programme on sex and drugs from Dutch broadcaster BNN a "risky and undesirable experiment." Internationally, the announcement of a television programme in which the hosts themselves would experiment with sex and drugs led to commotion. In September 2005, the Dutch newspaper Trouw reported that BNN had been "flooded with calls from the international media about Spuiten & Slikken," the first episode of which was due to air on the 10th of October. UK newspaper The Guardian and CNN both reported the following about the programme: "Host Philemon Wesselink (26) to try various drugs and report on his experiences."